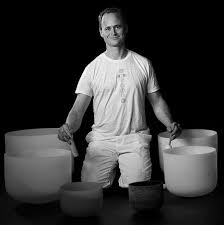 Mike McGuigan, RMT, IARP; brings over 20 years of experience as a multi-instrumentalist, playing music professionally both as live a performer and as a recording studio artist.   Blessed to have teachers that helped push him to be the best musician he could possibly be, Mike earned a music scholarship to play Bass Trombone at Western Illinois University, with Jazz being his emphasis. After college, Mike, under direction of Mark Bettcher, played Bass Bone with the Elgin Community Jazz Ensembles, performing with Grammy Award Winning Musicians Frank Catalano, Randy Brecker, Maynard Ferguson, and more.  He also played in several Rock & Roll bands, in the suburbs of Chicago over the years,  most notably known as the multi-instrumentalist for the all-original Funk Rock Jazz Blues Band- “City Hall Fred”.

Mike found Yoga to help naturally ease chronic lower back pain and discomfort.  It also provided much needed relief to help slow his “busy mind”.  Through that community, he discovered the Crystal Bowls and immediately became intrigued at the way he felt physically and mentally after experiencing these magical instruments.  In 2014, Mike completed training with the Vibrational Sound Association, and began his career as Sound Therapist and Sound Healer.

Mike’s rapid growth to the highest level of Reiki Teacher/Practitioner was under the direct guidance and mentorship of Kathryn Regganie, of Energy Pathways, Inc.  After completion of Master Teacher Certification, Mike continued to meet monthly with his teacher, as well as fellow students, to learn and fine tune these gifts and skills.  He is licensed, insured, and a member of the International Associations of Reiki Professionals, for humans, and also for pets/animals.

Mike is passionate and committed to help educate and raise the general public’s overall awareness and facts regarding Holistic, Natural Medicine and Healing methods, and is very excited about it’s future.